For more than a century these precious protected havens for wilderness and wildlife have allowed humans a peek into what North Carolina nature has to offer. There are 10 national parks, however, the Great Smokys may be the only one that reminds you of a traditional national park. Altogether there are 12 total parks when you include National Military Parks and Historic Sites all with scenic surprises awaiting. Visiting one is one of the best things to do in North Carolina! But don’t take our word for it, take the 18 million visitors these parks see!

The state stretches 500 miles across, spanning from rugged mountain terrain, sparkling waterways, and dense forests to mystifying marshlands and sandy coastal shores. Each park holds an abundance of natural wonders and an array of outdoor activities.

This national seashore preserves the beloved Outer Banks, a 70 mile stretch of coastline. It was the first national seashore in the country, and it protects the barrier islands Ocracoke, Hatteras, and Bodie. It was established in 1953, and its vast natural and cultural resources have been overseen by the National Parks Service ever since.

Open year-round with a plethora of seaside recreation available, this national seashore is often touted as the ideal location on the East Coast for fishing and for surfing. There are many opportunities here for spectacular bird watching, as well, especially migratory fowl. It also happens to be the superior site for scouting out shipwrecks and stalwart lighthouses, as it was once deemed the graveyard of the Atlantic.

Often called the Crystal Coast, this aptly named section of Outer Banks shore extends 56 miles to the south. This national seashore was established in 1966, and is home to many special species. It’s less developed than its northern neighbor, leaving opportunity for a more rough and ready exploration of its nature. Though less frequented, its beauty is just as awe-inspiring and great for shelling, fishing, and birding.

It’s made up of North and South Core Banks, and Shackleford Banks. These three barrier islands include two historic OBX villages to visit and Cape Lookout Lighthouse. Along this seashore lives an iconic herd of wild horses that is stunning to witness. There are several beach campsites along the undeveloped shores as well. A perfect way to savor the sea, sand, sunrises, sunsets, and stars. It’s classed as primitive beach camping so come prepared, though you usually won’t need a permit.

This is one of my personal favorite North Carolina National Parks. This national treasure in western North Carolina happens to also be a UNESCO World Heritage Site, and is one of the best North Carolina parks. It features two sections of the Appalachian Mountain Range, the Great Smoky Mountains, and the Blue Ridge Mountains. The park itself is over 522,000 acres of grand land, making it one of the largest protected wild spaces in the whole country.

The North Carolina access point is in the charming hamlet of Cherokee. It’s open year-round and receives 11.3 million visitors annually. The biodiversity here is bountiful. From elusive creatures, like black bears and synchronous fireflies, to the more common delights of deer and eagles, there’s always something spectacular to discover. There are sweeping views, scenic sites, and countless hiking trails to meet all your wilderness dreams.

The Appalachian Trail is an iconic East Coast thruway that runs from Georgia to Maine, with about 95 miles weaving its way around North Carolina. It’s the longest hiking footpath in the world, with elevation ranges from 1,725 feet at its nadir to 5,498 feet at its zenith. Its role as a climate-reliant corridor is protected by the Appalachian Trail Conservancy and the NPS. Its conception began in 1921 by private citizens.

It passes through a total of 14 states, with most of the land consisting of dense forest. In the Carolina portion, you will find its highest point, the Clingman’s Dome. The exploration along the trail is endless. Venture far and wide to find fields of wildflowers and wade in rivers and lakes. Climb high for breathtaking vistas at overlooks and balds. Trek down into the deep, dark Nantahala Gorge. If you plan to embark on this adventure, be sure to check all permit requirements for your intended routes.

The Blue Ridge Parkway is an all-American road and is an iconic way to travel in the country. It makes its way through 29 counties between North Carolina and Virginia, running 469 miles total. It’s the longest linear parkway in the country and one of the most scenic. It serves to connect Shenandoah National Park to Great Smoky Mountains National Park.

Not only is it deemed one of the best North Carolina parks that isn’t technically a park, but it holds the title of most visited national park site in the entirety of the nation, with 12.9 million tourists! The speed limit is topped at 45 miles per hour to make for a truly enjoyable journey. There are nine campgrounds open seasonally along the way if you’re hankering for a serene night in the woods. There are an array of tiny towns full of sweet Southern charm to visit, as well as a variety of breathtaking hikes to discover.  Make sure to stop at an Asheville brewery after your road trip!

Located in Flat Rock, this national historic site is a hidden Carolina gem. It’s in the southwest of the state, close to Asheville. The home itself belonged to the eponymous poet and biographer Carl Sandburg who moved there to write his life’s work in solitude in 1945. The residence is preserved for visitors, along with the surrounding 264 acres of pasture. There are still personal artifacts to interact with, including Sandburg’s extensive library.

It now features a goat farm and many nature trails to traverse the wooded mountainsides and rolling meadows. It’s available to tour year-round. Seasonally you can witness demonstrations on milking and cheesemaking on the goat farm. There are performances at the park’s amphitheater both based on his works and the Broadway play about his life.

This national historic site preserves the place of the very first English colony in the United States, Roanoke. It was founded in 1587, and contains about 14 acres of coastal land. It’s often referred to as the Lost Colony, as in 1590 every resident mysteriously disappeared without a trace. The only remaining evidence of the colony founded by Sir Walter Raliegh, who established it and then returned to England for assistance, was a single pole with the word Croatoan carved into it.

To this day there are many theories, but nothing to prove what exactly caused the colony to vanish without any signs of survivors. It’s open year-round for visitors to explore the early English settlement. It was also where the very first child was born in the New World, Virginia Dare. It’s in the charming coastal town of Manteo. This site works to preserve the cultural heritage of the Indigenous, European, and African American communities who existed here.

This is one of those North Carolina National Parks you may not have heard of. Located in the north-central part of the state in the North Carolina city of Greensboro, this national military park is a Revolutionary War battlefield. Open Spring through Fall, it’s truly a sight to behold. The battle took place in March of 1781. Around 1,900 British soldiers advanced on 4,500 patriots, and it lasted two and a half hours. It was short but serious and finished with the patriots having to retreat.

The troops were led by General Lord Cornwallis and Major General Nathaniel Greene respectively. Visitors can tour the site and enjoy the eight educational interpretive stops, or wander the 2.5 miles of trails through the battlegrounds. In the end it was a strategic victory for the Americans in the revolution, as the British were forced to give up control of the Carolinas soon after.

In Kill Devil Hills, this is the historic location of the first successful powered flight by the Wright Brothers. The field and hangar are available to tour, as well as a replica of the original machine used. The memorial tower marks the significance of the site and the visitors center displays tools, maps, and models along with other educational memorabilia.

The determined brothers chose Kill Devil Hills for the steady wind and optimal terrain around, as the tall dunes provided the perfect launch and the soft sands promised an easy landing. The moment their heavier than air creation stayed afloat was the beginning of the age of flight as we know it today. This coastal memorial provides an enchanting experience and an idyllic landscape to enjoy as well.

Overmountain Victory Trail is another amazing National Historic Trail that spans four states. 330 miles stretch across Virginia, Tennessee, North Carolina, and South Carolina to retrace the route used by the patriot militia during the Kings Mountain campaign in 1780.

The area is stunning and you can hop on and off the trail and many points. There are 87 miles of walkable pathways. If you happen to be visiting in September or October keep an eye out for the commemorative march every year. 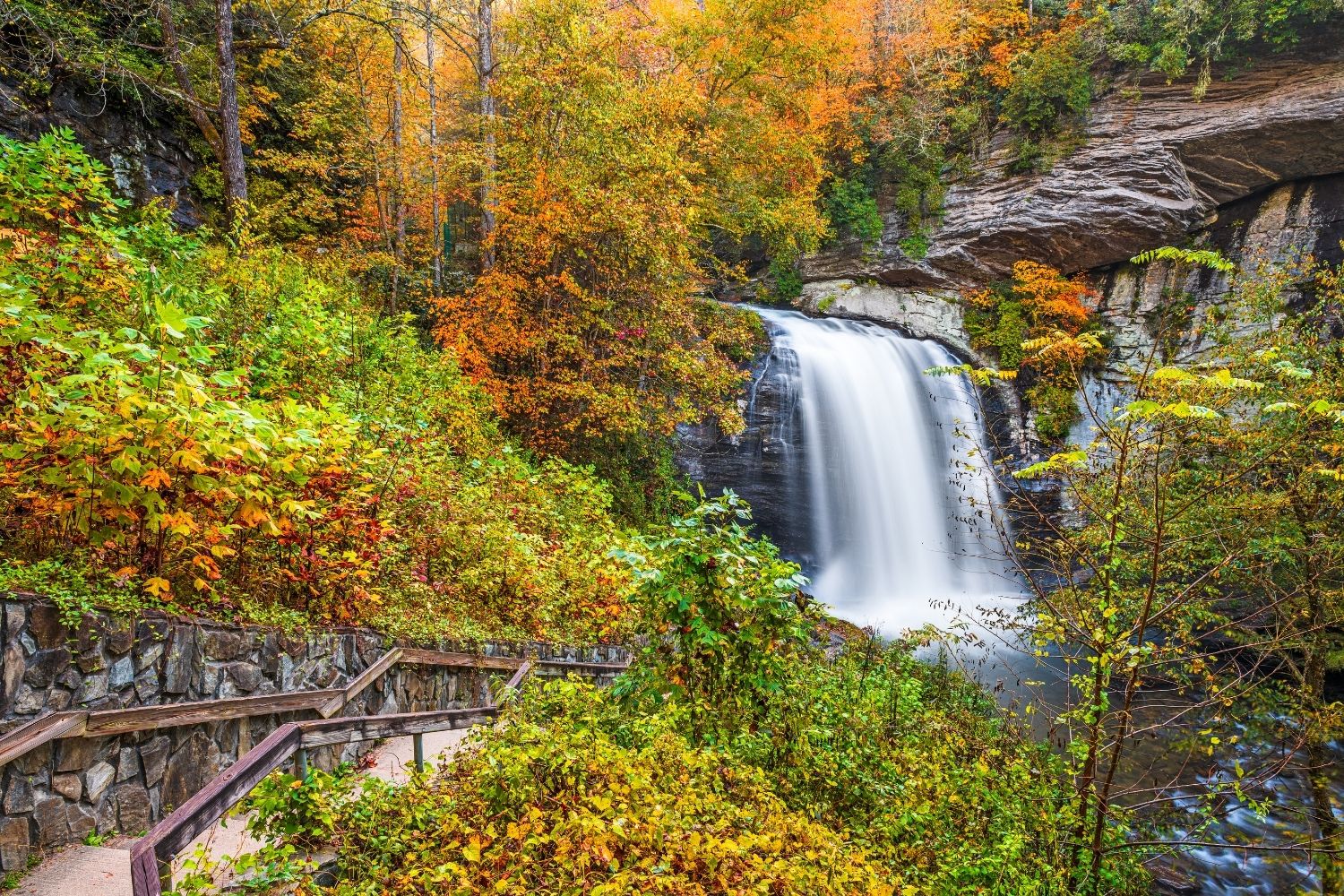 Pisgah National Forest spans over 500,000 acres in the mountainous region of western North Carolina. A pioneer of protected landscape, it’s the home of the first-ever school of forestry in… 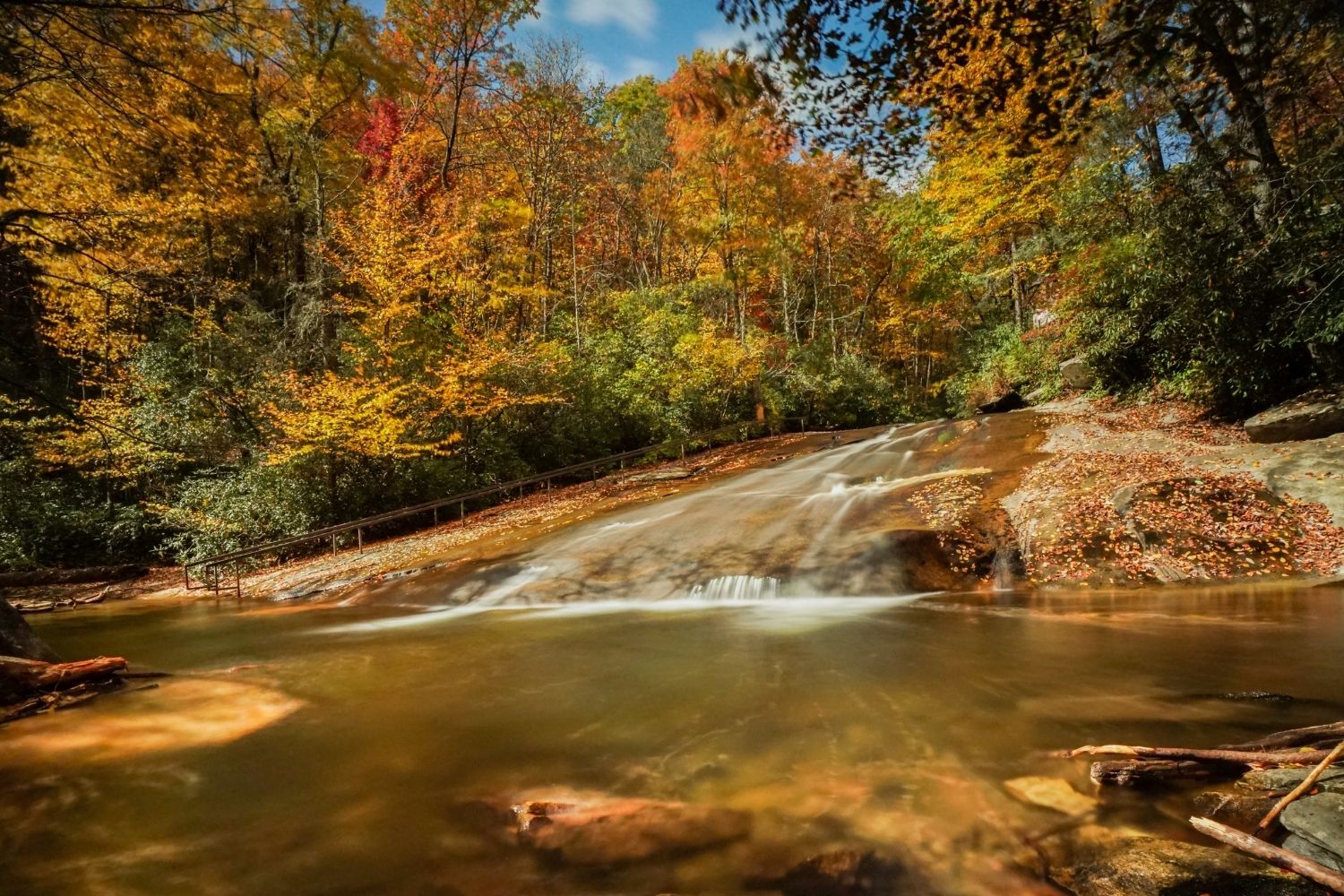 Sliding Rock is set in North Carolina, nestled within the majestic Blue Ridge Mountains. Sliding Rock is a 60-foot beautiful waterfall in NC that flows along a flat boulder forming… 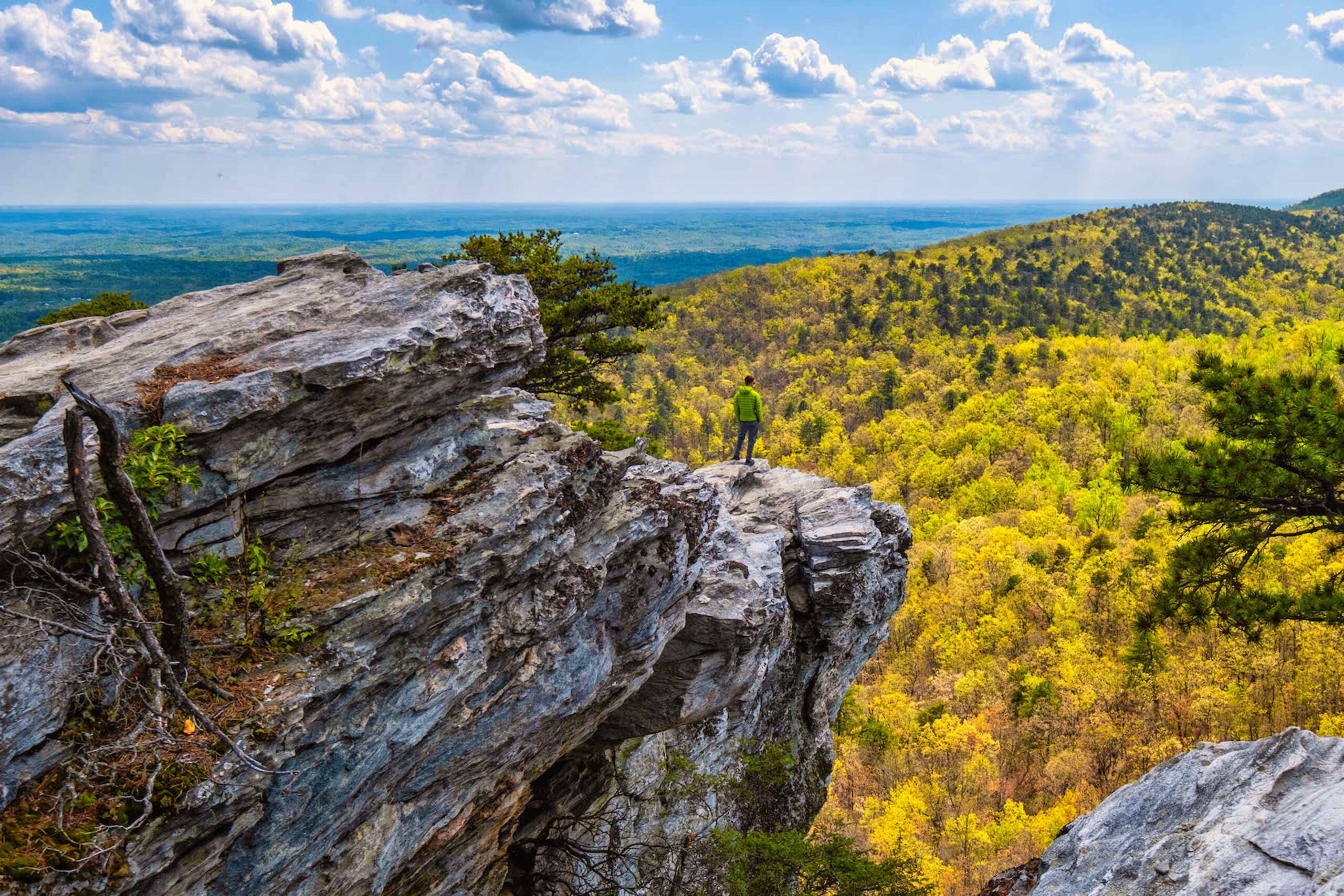 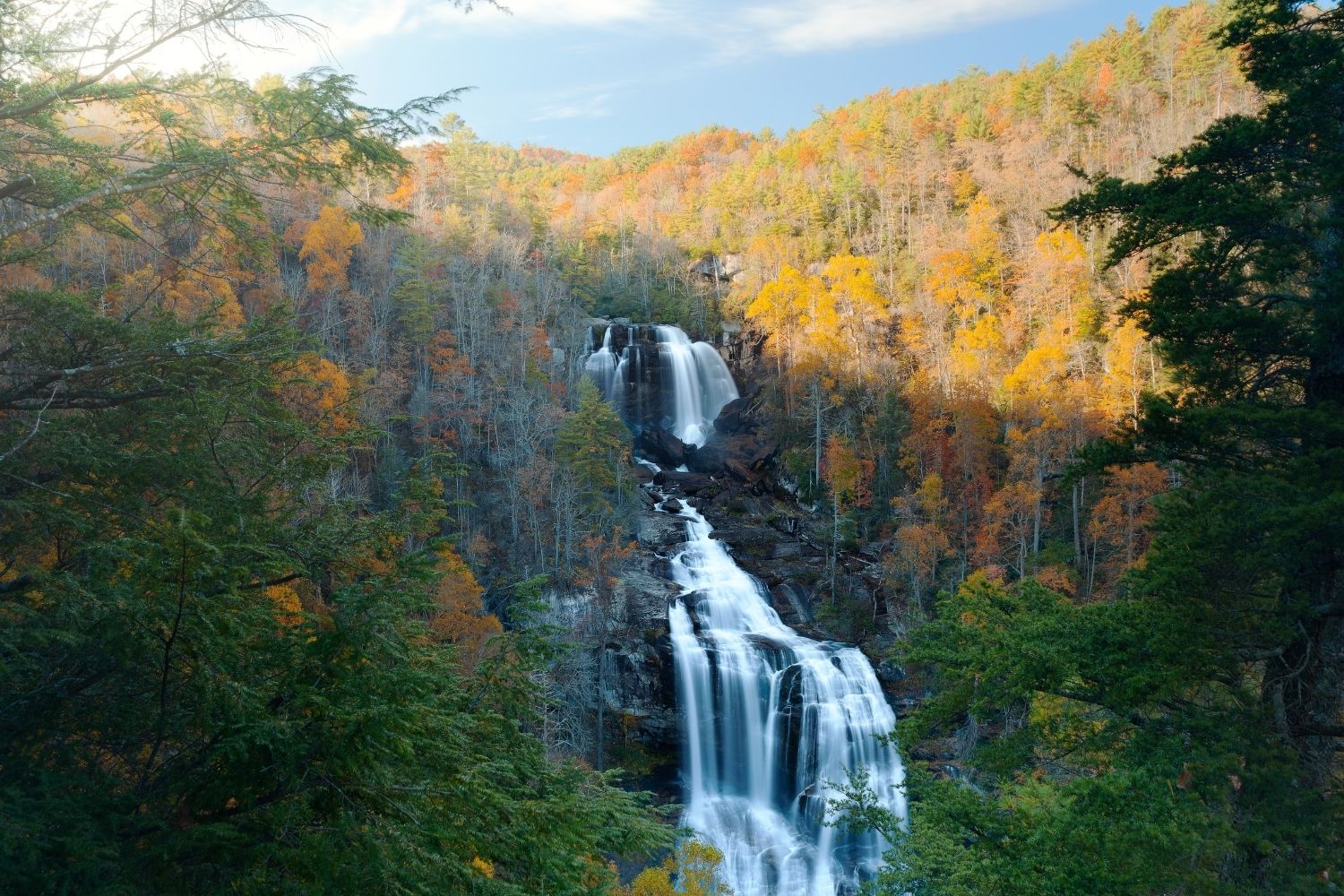 North Carolina is known as a land of natural wonders. None more alluring than the cascading falls found in mountain towns, and there are plenty of waterfalls in NC to…